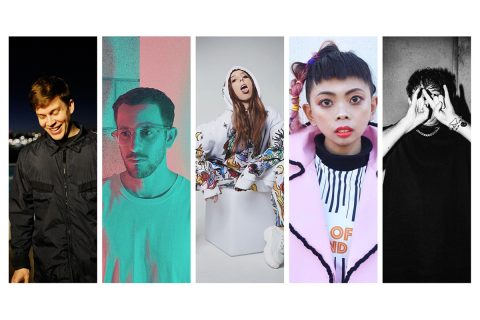 Over the last decade, we’ve seen dance music mutate in style at a rapid rate. From electro, trap, future pop, mumble rap and more, it’s been one hell of a ride. With the new decade here, it offers a fresh symbolic opportunity for artists to stamp forward-thinking ideas to herald in the next era of music. So what does 2020 look like? Who are the electronic artists to watch in Australia?

In partnership with Southern Cross University and their Bachelor of Contemporary Music course, we’ve dug deep across Australia to find five artists who are pushing the boundaries in style and flair to kick-off the ’20’s.

Southern Cross University is offering its Bachelor of Contemporary Music course at Coomera, right at the doorstep of the Surfers Paradise, as well as south in Lismore nearby Byron Bay in Northern NSW. The Bachelor of Contemporary Music offers students a variety of skills and career paths including performer, songwriter, producer, sound engineer, educator and session musician. On the music business side, the degree offers the skills to start and grow a career as a musical director, events promoter and/or a venue manager.

Without further ado, here are our 5 Aussie dance acts to watch for in 2020!

LALKA’s style of music provides listeners with a disjointed electro future pop that would hold that of the shortest attention span. Her most popular track ‘Bang Bang’ follows a trend of not following any trend at all, bending ideas into each other to create organised attitude-filled chaos. It’s the musical baby of Uffie, Ajax and Busy P.

You don’t have to look far into Pat’s extra-curriculum life to understand the complexity of his music. Currently doing a music-related PHD thesis, this soon to be Doctor of music creates intelligent electronic music that could be likened to artists Jon Hopkins, Four Tet, Bonobo and SASHA. In his most popular track ‘Plateau‘, Pat uses field recordings of thunder as well as hail hitting his window to create an organic and electronic composition. An artist with cinematic ideas beyond the realms of ordinary.

PNK FME (Pink Fame when said out loud) is a multi-talented producer and vocalist who uses his music to delve deep into the human condition, using his songwriting to wrestle with his mind’s ominous musings. We took notice of his single ‘Sauvignon Blanc’ that sits on the pop end of the electronic spectrum and has sing-a-long value. With smooth verses and an earworm of a chorus and a voice fit for a lullaby, PNK FME has all the ingredients to potentially produce a hit over the next few years.

Originally coming to light after winning a DMA’s remix competition mid-last year, Sunshine Coast producer Borderlands makes cinematic dance music that is the perfect soundtrack to a drive with stunning natural views. His beat-driven music is expansive with an emphasis on synths, guitars and drum patterns. A great example of this is his song ‘Say It’, that uses a combination of guitars and vocal samples, lead beautifully by a softly spoken anonymous vocalist. Sitting in a similar category to Pat Carroll, Borderland State is ripening to be a headline spot at bush doofs.

VNCCII is a singer, songwriter, producer and DJ incorporating the structure of dance music and blending ideas that would be best explained as ethereal sci-fi pop. Not constrained to a particular mood palette, her discography so far feels very theatrical when played in succession with songs that go from beautiful to banging. The song ‘Citizen A.I.’ caught our attention with its hard-hitting bassline and thick dubby synths. VNCCII packs a punch and will be a real peak time party pumper in years to come.

Read more about the Southern Cross University Bachelor of Contemporary Music course here where you can study music and make beats by the beach.