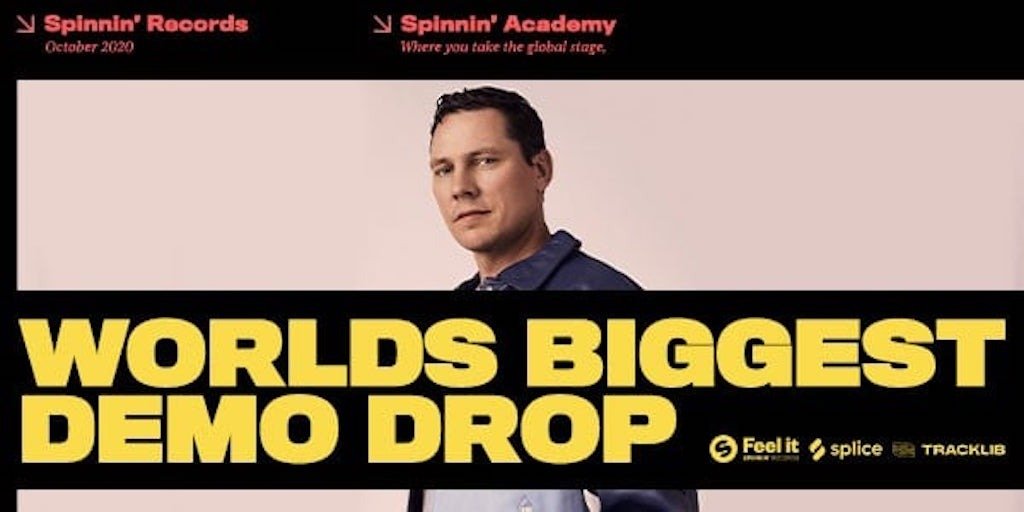 There is no question that Spinnin’ Records remains at the forefront of discovering dance music’s breakout artists. How many times do you find a new song, just to discover the album artwork has that recognized “S”? This label helped launch the careers of Martin Garrix, Oliver Heldens, Sam Feldt, and now maybe even you! To clarify, Spinnin’ Records has created The World’s Biggest Demo Drop to give up-and-coming artists a chance at releasing on a major label.

With Spinnin’ Academy XL, and in collaboration with Apple Music and Shazam, the contest aims at providing global exposure. Producers can submit their demos here as well as sign up for workshops with Spinn’s all-star team.

On October 15th, the DJs will have access to a live evaluation with the renowned Spinnin’ Records’ A&R team. Additionally, some of Spinnin’s biggest names such as Breathe Carolina, Moguai, and Lucas & Steve signed on to offer support.

The 15 best demos will be featured on the Apple Music WBDD DJ mix on October 30th hosted by Kim Kaey. Fans can shazam their favorite tracks during the DJ mix to help vote for the best track. The track with the best rating from Spinnin’s A&Rs and the most Shazams will help decide the winning artist. The official Spinnin’ page says Tiësto will have the final say in whose track will have an official release on Spinnin’ Records with support from Apple Music.

“Using his unparalleled expertise in the industry, Grammy® Award-winning DJ/Producer Tiësto will select not only the winner but provide the opportunity of a lifetime.”

Adding Tiësto Into The Mix

Spinnin’ Records has chosen Tiësto as their official ambassador for the World’s Biggest Demo Drop. He will be the deciding factor in which song from the 15 finalists gets picked to be released on Spinnin’s official label. Also, he will pick one runner-up to be released on Tiësto’s imprint label Musical Freedom. Check out this ad which features his latest track, ‘The Business’.

📢 We're proud to announce @tiesto as the World’s Biggest Demo Drop Ambassador! 🤩 This means that you have the opportunity to have your demo not only heard by Tiësto, but also a release with Spinnin’ Records or Tiësto’s @musicalfreedom label!
More info: https://t.co/ywgp8amYVc pic.twitter.com/babDb2zcsq