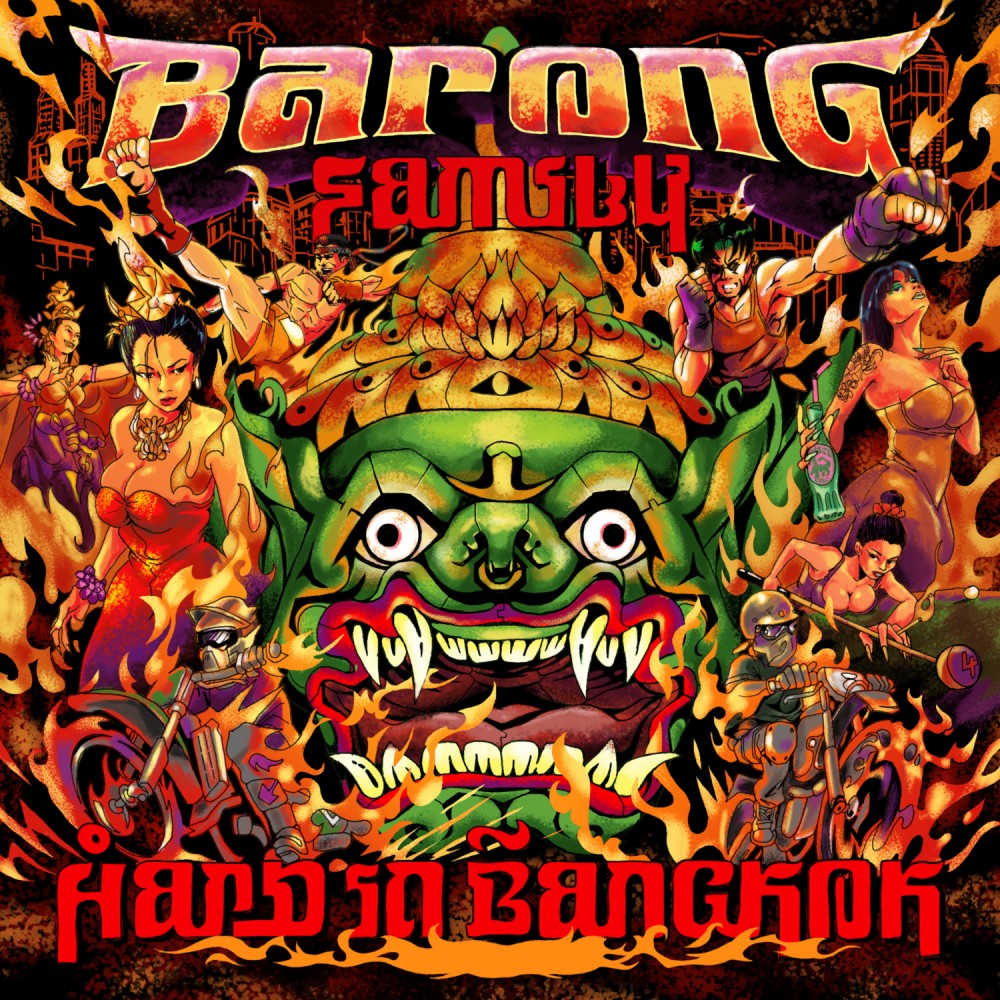 If you like things loud and blisteringly fast then you’re going to love this fourteen track barrage that the Barong Family has lovingly dubbed ‘Hard in Bangkok.’ That’s fourteen tracks from Yellow Claw’s crew of some of the rowdiest producers in EDM titled after one of the world’s most famous party cities.

Why ‘Hard in Bangkok’ you ask? The answer is simple. Yellow Claw and the fam flew to Bangkok and produced this entire album over a week of non-stop sessions. The pulse of the city pumps through every track on the album so there should be no surprise that what lies behind the play button is a collection of heavy-hitting, gut-punching, fuel-injected, sonic napalm.

The fam left no genre untapped during their stay in Thailand, there’s acid, and hardstyle, trap and dub, g-house and riddim – but rest assured that no matter what genre they dabbled in, when the drops arrive, and they do often, they destroy everything in their path.

We asked Yellow Claw and the rest of the family how each of these fourteen productions came together to get a little bit more insight into their process and what it means to be part of the Barong Family.

“It’s a lot of fun we did a song with both RayRay & Juyen in Thailand. We had a lot of time besides music to just zoom in a little bit more on vocals, new ways to mix stuff. This song is a good example of combined knowledge and vibes.” – Yellow Claw

Ill as This – Crisis Era and Rawtek

“This was such a fun track to make. Crisis Era & I had several cool ideas for this song and throughout its duration you can really hear how it continues to evolve in such a dope way.” – Rawtek

“I was just trying to confuse the techno and hardstyle fans. What genre is it? Hardstyle? Techno? Is it a spaghetti or a potato? We don’t know.” – Sihk

“This one is just a great example of sitting down and seeing where the music takes you.” – Radical Redemption

“RayRay and I sat in the studio thinking ‘what kinda music would a punk diva robot from future Bangkok listen to?’ This is what came out.” – Crisis Era

“Stoltenhoff & I set out on a mission to produce a song that will make you nice & sweaty and I think we succeeded. This track has definitely become one of my favorite songs to play live.” – Rawtek

“Jim walked in to the studio with this recording he just did of the vocals and he was super psyched about them. Everybody else was on board to use it right away. Joey started on the kicks and low-end (obviously) and I remember me (Nils) and Texas to put on our headphones and start making parts of the song. At the end of the sessions we threw everything together and turned out we made a baby. This song turned out to be everything these 2 guys stand for. Shoutout to Texas and Radical for being LOUD and LEGENDS.” – Yellow Claw

“I was immediately inspired by the chords/melody LNY TNZ had for the song. After our session in Bangkok, I went home to LA to write and record the vocals for it. It’s actually my first time ever releasing a song with me singing on it and I’m very proud of how it came out. The drops are so insane as well.” – Rawtek

Let There Be Bass – Yellow Claw and Dither

“We wanted to try something a bit different. Some happier house vibes in the break, dark & heavy techno style drops. Absolutely love the way it came out.” – Rawtek

“I remember me and RayRay working in silence, both with headphones. After a few hours we put both our ideas together and blasted it over the speakers. It went OFF!” – Dither

‘Sihk and us were eating super spicy thai food and then suddenly we had the idea to transfer this spiciness into a banger.” – Psycho Boys Club

“I love working with RayRay she is so inspiring! She has he own vision of music with all the best ideas at the best moments.” – Bellorum

“I gotta be honest here. I recorded the vocal with Jim before the camp. But brought it there and played it for Crisis Era. Not much to say about this song but that Crisis Era are professors in electronic music. It’s always a pleasure to work with them cuz we learn something new EVERYTIME. ” – Yellow Claw

“This was my first studio session during the Bangkok week. It was also my first time to work with GHOSTER! Glad the collab came out so good! You want a headbanger, and we give you a headbanger!” – RayRay

“Bellorum & I were roommates for the week in Thailand. That dude is so musically talented. We had a lot of fun making this track. It felt like we were doing our own version of that whisper song “Wait” by Ying Yang twins.” – Rawtek

Wake Up – Lil Texas and Rawtek

“This was my first session of the week. Early in the AM working with Lil Texas on the heaviest/ fastest song I’ve ever worked on lol. No better way to do it. Our styles blended together really nicely & created something fucking insane. Feels like you’re getting woken up by some random pissed off dude with boxing gloves because you got too drunk the night before and somehow ended up on his kitchen floor.” Rawtek

“This one definitely deserves to be the last track on the album.

Welcome to hell everyone!” – Dither